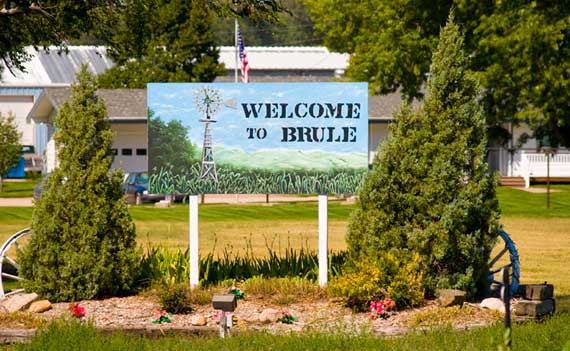 A historical marker for California Hill, an important milestone on the Oregon/California Trail, can be seen about 4.5 miles west of Brule on Highway 30.

Between 1841 and 1861, nearly 400,000 westbound pioneers passed though the Keith County area on the Oregon and California Trails. The wagon trains crossed the South Platte river west of what is now Brule and climbed California Hill before heading northwest to Ash Hollow and the North Platte River, and continuing their difficult journey to the west coast. Trail ruts are still visible most of the way up California Hill, and also at Ash Hollow State Historical Park near Lewellen, Nebraska.

The village of Brule was established in 1886, when Major Isaac Barton and his wife, Elizabeth, purchased a quarter section of land they considered the “garden spot of the county.” Soon a lumberyard and store were built, and the Union Pacific Railroad made it possible for more farm families to come to the area.

Today, Brule is a friendly rural community of 309 residents, located on I-80, and Highway 30, Nebraska’s Lincoln Highway Scenic and Historic Byway. Annual celebrations include Brule Day, held in August with a parade, fun run, kids activities and street dance. The Brule Gun Show is held twice a year, and draws up to 1300 attendees.

The south side of Lake McConaughy at Van’s Lakeview is only 9 miles from Brule via the Sunnyslope Road.