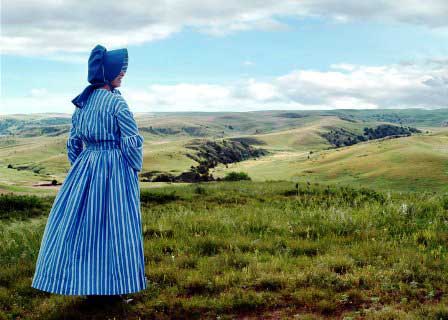 Ash Hollow State Historical Park near the west end of Lake McConaughy in Garden County is one of Nebraska’s most intriguing state parks. A modern interpretive center interprets the area’s geology, paleontology, prehistoric history and use by native American Indians, the military, and 19th Century explorers and pioneers. Ash Hollow Cave shows evidence of use of the area by prehistoric man as many as 6,000 years ago. More than 30 million years of geologic history and fossils of prehistoric mammals including rhinoceros and mastodons can be examined at the park. Ash Hollow was a stopping point for Plains Indians, a site of U.S. troop maneuvers and a place for shelter and water on the Oregon, California and Mormon Trails. Ruts are still visible at Windlass Hill where wagons were lowered into the valley.

The Visitor Center is situated on a bluff overlooking the mouth of the canyon. The center houses a display of pioneer history, as well as fossils from prehistoric rhinoceros, mammoths and mastodons. Check outdoornebraska.gov/ashhollow for seasonal hours and more information.

In 1835, Ash Hollow was the site of a battle between the Sioux and Pawnee.

The Battle of Blue Water took place there in 1855.  From the Nebraska State Historical Society  website: “One of the great tragedies of the Indian Wars, the battle, also called the Harney Massacre, took place six miles northwest of Ash Hollow in the Blue Water (now called Blue Creek) valley. In response to an Indian raid near Fort Laramie in 1854, General Harney led a raid on a Lakota village on September 3, 1855, killing 86, capturing 70 and destroying the village. The attack was one of the first military engagements between the Army and the Sioux.”