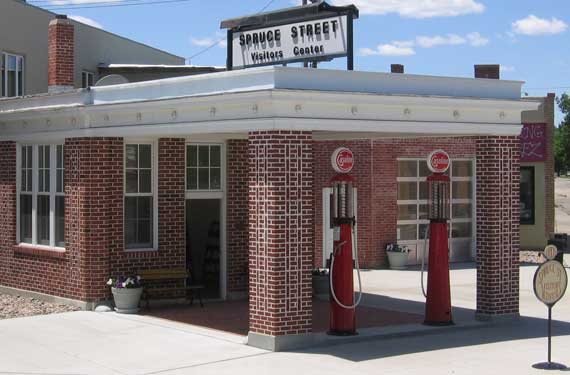 Built in 1922, the Spruce Street Station in Ogallala is considered one of the best preserved of fewer than 20 former Standard Oil stations still standing. Once the state’s largest marketer of petroleum products, Standard Oil of Nebraska rose to prominence with the advent of the automobile.

Through the efforts of the Ogallala Main Street Program, the Spruce Street Station was renovated in 2002-2003. Like the Ogallala Post Office, the Mansion on the Hill and the Little Keystone Church, it is listed on the National Register of Historic Places.

Today, the station and adjacent 1937 service bay serve as the Spruce Street Visitor Center. During the summer months, it is often open to the public, staffed by volunteers from the local Retired Senior Volunteer Program. The service bay portion is also available year round for community events.