The entrance at Martin Bay is closed to the north but will remain open to the south until early 2022, for those visitors wishing to utilize the Martin Bay Low Water Boat Ramp.

Fall Fishing Report provided by Nebraska Game and Parks (9/27/21) Fall fishing is in full swing at Lake McConaughy SRA with anglers finding success across the reservoir for multiple species.

Walleye anglers are typically fishing in deeper (20-50 feet) of water, using slab spoons, blade baits and vertical jigging around the Mako and Ogallala Beach areas of the south side and from Lemoyne back to Arthur Bay on the north side. There has also been some success on an early morning and late evening bite on the southeast rocky points, casing cranks and spinnerbaits. Smallmouth anglers are still finding good numbers and excellent sizes along the southeast rocky points during the mid-morning period, throwing a number of bass rigs, but with particular success with Ned Rigs and spinnerbaits. Catfish are still being caught at a number of areas, but most anglers have been targeting the west end of the reservoir.

Bank anglers have had good luck in the Spillway and Diver’s Bay areas, casting a number of jigs and baits from shore for walleye, catfish and smallmouth bass. With lower water levels, most of the areas will involve a decent walk.

Seasonal Overview :  With over 55 square miles of water and over 70 miles of shoreline, Lake McConaughy is Nebraska’s largest reservoir and a popular year-round fishing and outdoor recreation destination.

Winter:   Before the bays are iced in, success can still be found slabbing for walleye by Martin Bay or near Lemoyne.  Catfish can be caught year-round, especially at the west end of the lake. Trout can be caught from open water on Lake Ogallala all winter.  Anglers generally have success with fly-fishing small nymph patterns, as well as nightcrawlers and eggs on spinning tackle.

Spring: The walleye spawn at Lake McConaughy begins around the middle of April, and continues through the first part of May. From the middle of May to the Fourth of July, anglers target walleye and wipers using live bait or casting jigs to the shoreline.

Summer: Success with white bass, and small and large mouth bass can generally be found from May through the end of August casting jigs or lures to rocky points.  Walleye and wipers are targeted through August trolling lures and spinner baits.  Walleye and wipers are usually found off the face of Kingsley Dam or in bays off rocky points, although walleye are caught throughout the lake.  Yellow perch can be caught all summer throughout the lake.  Northern pike may sometimes be found at the west end of the lake casting lures and spinner baits. Rainbow trout, brown trout, and tiger trout can be caught in Lake Ogallala all summer, as well as in the river and supply canal. Anglers find success casting off boats or the shore as well as trolling.

Fall:  From Labor Day weekend through Thanksgiving, anglers slab for walleye and white bass on Lake McConaughy.   Catfish can be caught year-round, especially at the west end of the lake. 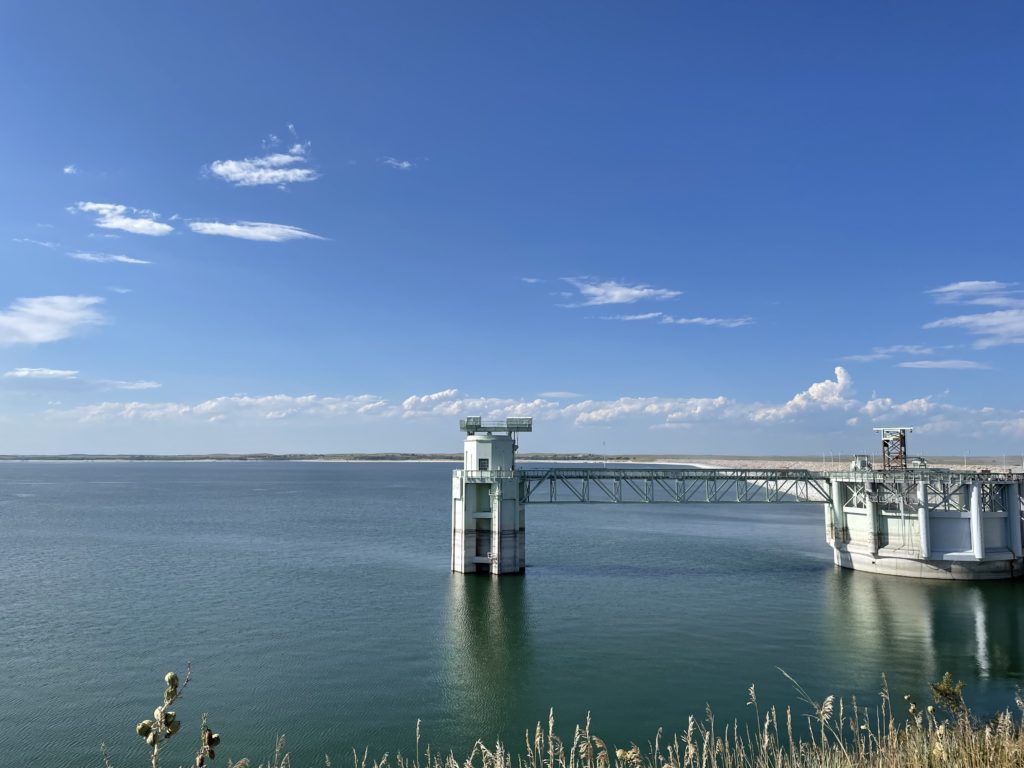