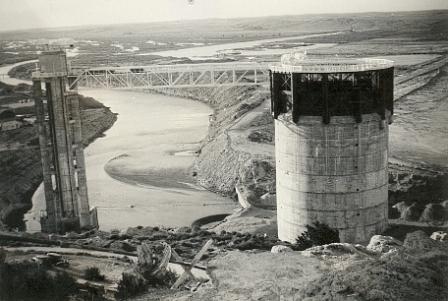 As early as the 1880′s, citizens of south-central Nebraska discussed the possibility of bringing irrigation to the area. Interest in irrigation grew with each successive drought cycle until the drought and economic depression of the 1930s helped convince state and federal officials and community leaders of the need for irrigation.

The Public Works Administration approved funding for the hydro-irrigation project in 1935 and construction began in 1936. Kingsley Dam was closed and dedicated in 1941 and project operations began soon afterward.

The dam and reservoir are named for George P. Kingsley, a Minden, Nebraska banker, and C.W. McConaughy, a grain merchant and mayor of Holdrege, Nebraska, two of the leading promoters of the project. Although neither lived to see the completion of the project, their leadership and perseverance eventually culminated in a public power and irrigation project that helped Nebraska become one of the nation’s leading agricultural states.

Kingsley Dam, located 9 miles north of Ogallala, Nebraska, is the second largest, hydraulic fill dam in the world. It is over 162 feet high, 3.1 miles long, has 26 million cubic yards of material, and holds Lake McConaughy, which is 22 miles long and 142 feet deep.

Even though it is smaller than Lake McConaughy, Lake Ogallala in the middle class size of lakes in Nebraska. Sand from the riverbed below was pumped to form the sides of the dam. Then, to make sure that nothing would try to go under the dam, giant steel sheets were driven into the watertight core and into the ground below. The water facing side of the dam is layered with limestone rocks from Wyoming and 180,000 “jackstones.”

A jackstone is a 6-pointed stone that looks similar to a toy jack, weighing over 800 pounds each, for a combined weight of 144 million pounds.

A unique feature to the Kingsley Dam is the water release and flood control system. The system is located on the south side of the dam, partially in the water and is composed of two parts, the outlet tower and the morning glory spillway. The outlet tower is 185 feet tall, 42 feet wide, has one ring gate, and 4 tractor gates that regulate normal water release functions like irrigation. The gates are located on the sides and middle of the structure. The structure is connected to a 20 foot wide, steel reinforced, concrete tube that runs underground to the power plant on the other side of the dam. When all the gates are open, it can release over 7,000 cubic feet per second, or over 420 thousand gallons a minute.